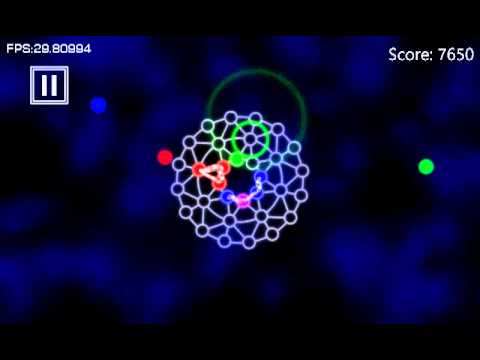 Nucleus is a puzzle game for Windows Phone 7 devices which attempt to put an interesting spin on the common Match-3 gameplay style. Players match the RGB color  components of falling orbs(IE: any one of the red, green, or blue color values must match) across the three rings of the catcher lattice in the center of the screen to earn points and eliminate the orbs. The game ends when the catcher is full and no elimination is possible.

Progressively larger point awards are earned as an elimination chains from one orb to another, encouraging players to build larger chains for higher score.

Nucleus has undergone several revisions since this page was originally posted, but the core gameplay has remained the same as shown. It shipped in November of 2012 and has had several support and enhancement updates. While the final version included many phone-specific features that makes it unable to be ported back onto the desktop, the prototype desktop version is going to remain available for download here. The desktop file includes the XNA redistributable required to run the game.

Designing Nucleus: Odds and Ends and the Title Screen

So, I feel I’ve been talking a lot about code lately, especially for someone that claims to be a game designer. This isn’t a bad thing—after all, I have to write the code myself, and designers really should, in my … END_OF_DOCUMENT_TOKEN_TO_BE_REPLACED

Yep, more little fiddly coding bits today. I’m very sorry. Today it’s a bit more about optimization and keeping code clean and quick-running from the perspective of someone that is admittedly not extremely good at it, but is trying very … END_OF_DOCUMENT_TOKEN_TO_BE_REPLACED

Another little snippet of wisdom from adventures in WP7 and XNA. Today it’s a useful little bit of trig for dealing with a particular input case… which is likely to be fairly common on a phone touchscreen, among other places. … END_OF_DOCUMENT_TOKEN_TO_BE_REPLACED